It’s not been a great week for logging, partially because I have felt distracted, unsure of which direction to go in, and have not really achieved the thing, whatever the thing is. I guess I am also unclear what this is really for, because writing up as I go is not organised enough for anyone else to follow. Maybe I should write recap, tutorial-style posts, after getting a useful thing written and deployed.

The week started off a little sad. Padfoot, one of our two remaining guinea pigs, died overnight on Monday, shortly after getting a diagnosis of bone cancer. We buried her in the back garden, which involved hours, on Tuesday, of me making a grave in the wooded part. Digging through tree roots and into clay is hard. 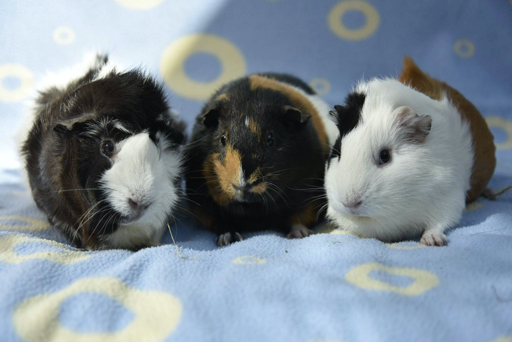 Left to right, Ned who died last month, Padfoot, and Prongs. Prongs is lonely now so we are thinking of getting her a new companion.

Just a brief outline here. I will try and write a more coherent tutorial when I have something more coherent to write. This week I was working on approaches to deploying an actual Elixir application. I have been working with this freshly generated one. (I’ve linked to a particular commit).

This is the first time I have used built-in releases, rather than distillery. Unsurprisingly it’s not too different. The challenge is, of course, compiling for the target and including the appropriate runtime, when I still develop on OS X and am deploying to Ubuntu. There are various options including:-

The Dockerfile for setting up the build environment is here. Things to note:

The shell script for building within the Docker container is here. Note:

It’s all tied together with this script to create the image, and release from it.

The infrastructure setup is based on the examples from last week. The main Terraform file is here. One major difference is that the Elastic/Classic) Load Balancer has been replaced with the Application Load Balancer.

Turns out the the simpler classic version does not support Websockets, which is not terribly well documented. This would be a problem for LiveView.

Application Load Balancers require that they are attached to at least two subnets in different availability zones. This makes sense in terms of maximising resilience in case of outage, which is not a thing that’s bothering me right now. I ended up creating a spare subnet, with nothing else attached, which is a bit of a hint that load balancing is over-egging things right now.

I also added another cheeky wee Terraform file to automate setting up the DNS in DNSimple every time I recreated the infrastructure.

I had an initial plan to (for now) upload the release using the Terraform file provisioner and maybe untar and start it with a remote exec. The 18mb gzipped tar file times out on upload, quashing that option.

For now I am doing it with a separate shell script. It works. (If you’re wondering about the service start stuff, the application is made a systemd service here)

I would like to try using Packer to create a custom API that contains the release.

Thoughts on the load balancing

Load balancers are a chunky bit of kit, and so far I am only deploying a single instance. Running the figures, once I’ve exhausted by free tier an active load balancer will cost $0.023 per hour or about $16.80 per month compared to about $8.50 for an unreserved t2.micro instance. With a single instance there’s no load to balance.

For now it’s overkill for a hobby project. For something with remotely production like needs, it would probably be worth load balancing across availability zones and probably autoscaling.

It is a pretty convenient way to deal with Amazon issued SSL certificates though; much easier than approaches using Let’s Encrypt (awesome as it is). For that reason, and that I’ve still free-tier allowance, I’m willing to swallow any cost for now, but it would be good to look into a simpler single instance setup.